The Duet has three Thermistor inputs, of which two are used for the standard RailCore build.

The M305 GCODE defines these in config.g as appropriate for your build, for example:

In addition to the two above, the Duet2 has a third unused Thermistor input and the Duex5 has five more thermistor inputs for added expansion.

The Kit’s Keenovo bed heater has an additional NTC 100K thermistor bundled into the heater, so why not connect it for monitoring? Plug it into the E1 THERMISTOR2 port on the Duet, which is selected by the X2 flag for M305: 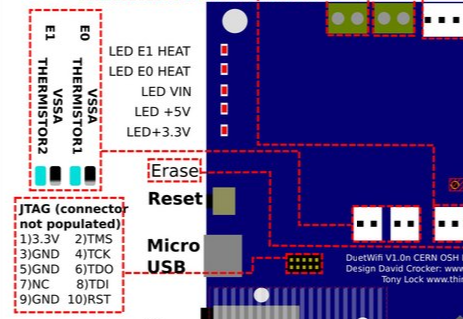 Thermistors that are not associated with Tools or Heaters can be assigned to a “Virtual Heater” in RRF2. This gives a means for them to show up in the DWC Web interface and on the graph. The first three Virtual Heaters are pre-defined in Duet RRF2 and cannot be used for thermistors:

P103 and higher can be used for our added thermistors.

The Duex5 adds another five thermistor inputs! Go nuts.. they’re really cheap. Five thermistors for $8 on Amazon in June 2020. These come terminated with 2-pin connectors that will work fine, and they are non-polarized, safe to plug in either way.

The five Duex inputs are numbered on the board’s silkscreen and diagram. Note that the RRF2 M305 gcode uses the THERMISTOR number and X designation for each, instead of the E number:

To view the thermistor readings, each one should be added to a new Virtual Heater and assigned a name:

The new values show up under Extra: 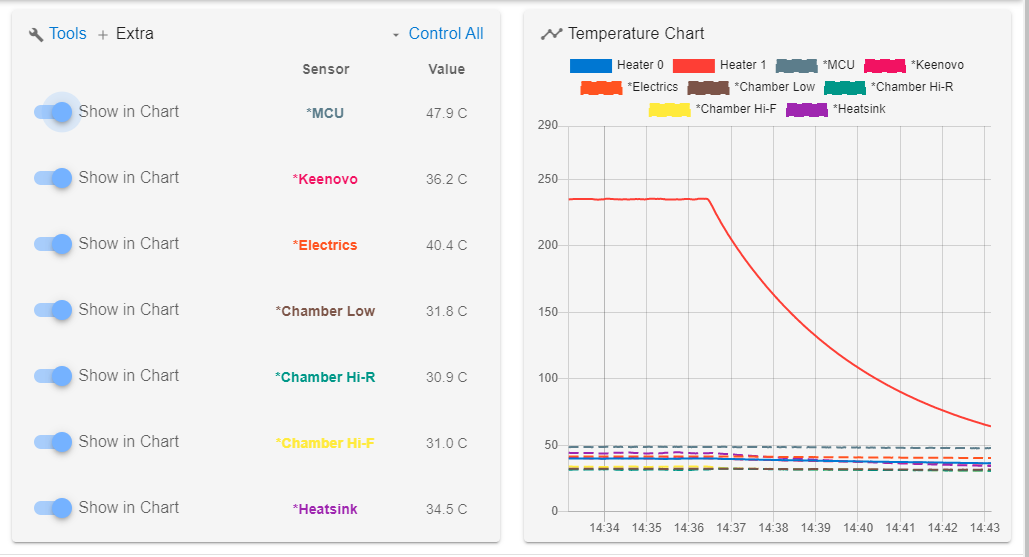 Additional fans can be controlled thermostatically from these new virtual heaters by associating them. For example, Fan P3 can cool an enclosure based on the Virtual Heater 106 thermistor above, coming on at 60° and maximum speed at 62°C:

Thermistors are cheap, easy to place around the RailCore, and easy to configure for added visibility into the machine’s operation.